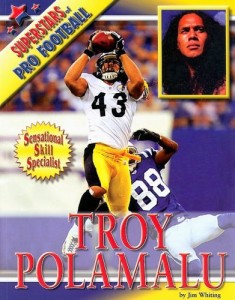 One of the hardest-hitting safeties in football, Troy Polamalu turned his life around at the age of eight when he moved to rural Oregon to live with his uncle and avoid the mean streets of Southern California. He became a prep star and All-American safety at USC before being drafted by the Pittsburgh Steelers. Troy is different from many football players because he is deeply religious. He prays between every play and spends much of his free time attending church with his wife.

My grandson loved it! (amazon.com)