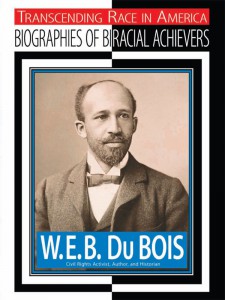 Long before the start of the Civil Rights movement, W.E.B. Du Bois was working tirelessly on behalf of black people in this country. A co-founder of the NAACP, he wrote, gave speeches, and many other activities in the cause of social justice. Du Bois became controversial in the last years of his life. He took political positions that many Americans – both black and white – didn’t approve of, but refused to back down or change what he believed in.

Despite personal tragedies and a tumultuous career, Du Bois is recognized as a true champion of his people. Whiting shows Du Bois as one never afraid to speak his mind and stand up for his beliefs, even when they were at odds with those of major figures such as Booker T. Washington. The author openly discusses Du Bois’s political and ideological struggles, which concluded with his move to Ghana and admittance into the Communist Party. The book, part of the Transcending Race in America: Biographies of Biracial Achievers series, provides solid information about Du Bois. (ALA Booklist)